Request a call back
Arrange a call time

What you should (and shouldn’t) plant in your garden

When picking out plants and trees for your garden, it’s easy to bypass native British trees and be seduced by exotic species. You go to a famous garden and see wonderful designs based on themes from Japanese formal gardens to Alpine meadows. However impressive they are, don’t let them blind you to the advantages of native British trees and plants.

Adding native species to your own garden can bring some real practical benefits, including:

So whether you want to give the local wildlife a helping hand, or just improve the view from your summer house, let’s look at some native British trees in a little more detail. We’ll also offer some practical tips for choosing the right native trees for your garden, and advise why you shouldn’t plant certain species. 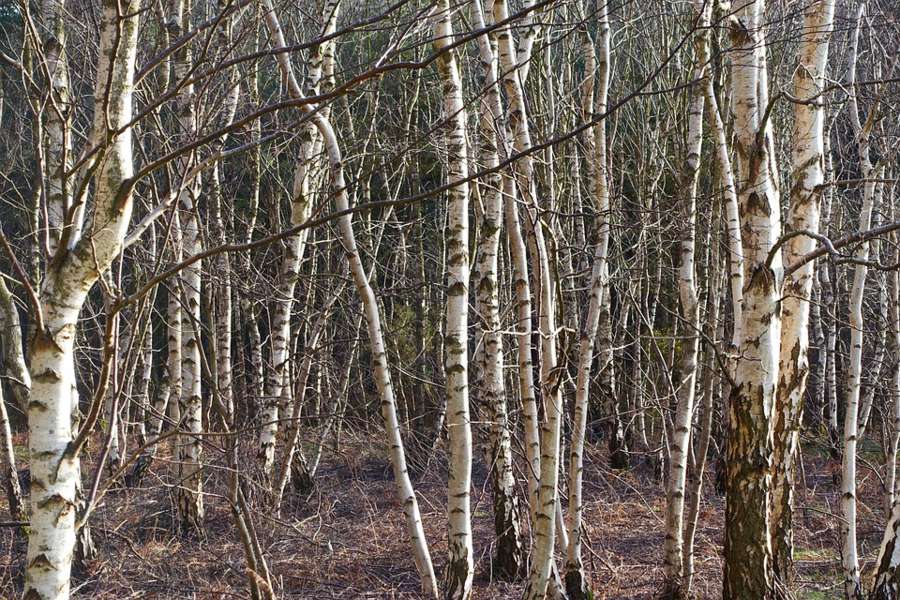 Strong roots and lower maintenance: It’s an obvious point when you think about it, but native British trees have evolved to flourish here. They’ve spent centuries adapting to the local climate and conditions, and are likely to grow strong roots. This in turn means soil is less likely to be washed away when the UK weather is at its wettest.

The fact they’re adapted to our climate means they need less protection against the British seasons – whether they bring sun, rain or frost. So that’s less work for you.

Improved soil condition: It is not commonly known, but some native British trees (mentioned below) actually have the ability to improve the soil around their roots. They help feed the plants around them and enrich poor quality soil (which is a big benefit if your garden soil is full of building rubble).

Wildlife: Again, it’s obvious once it’s pointed out, but native British wildlife and native British trees have evolved to live together. Native trees will provide homes, shelter and sustenance for native species of birds, small mammals, including hedgehogs, insects and other wildlife.

According to the RSPB, which has a really useful blog on planting a wildlife garden, native species of holly and hawthorn are especially wildlife friendly.

What exactly is a native British tree?

We’re not going to get into intense levels of scientific detail here, but it’s basically one that started growing ‘naturally’ in the British Isles from the Ice Age onwards.

Some quintessentially British-sounding trees, such as apple, cedar and chestnut, are actually foreign imports, and not ‘native’ at all (though some may fall into the category of ‘naturalised’).

If you’re looking for a true native, the Royal Horticultural Society (RHS)’s top five recommendations are:

But before you baulk about that being a limited choice, don’t worry: there are many more native British trees to choose from. And you certainly won’t have to miss out on colour or interest. 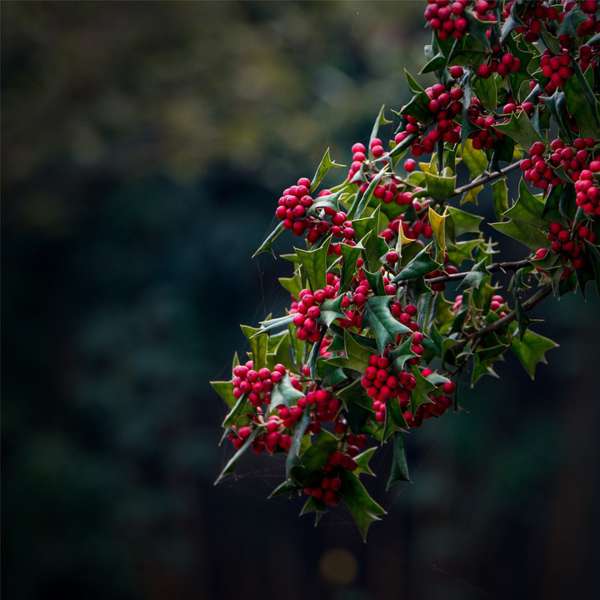 If your space is limited, you want to look at trees that will peak at 5-8 metres when they’re fully mature. The RHS can be your guide here, with a good list of suggestions including some varieties of maple, hawthorn and blackthorn. The latter have really attractive white blossom and purple berries, which can be used to make sloe gin (though check that the variety you choose has edible berries).

Crab apples are another one to look at for smaller gardens (and larger ones too). They can thrive in many different soil types, and have beautiful pollen-rich, white blossom. Though you’ll certainly not want to eat a crab apple raw off the tree (far too sour), they’re brilliant for jellies and chutneys.

Also great for your store cupboard is elder. Admittedly, it’s not an especially attractive tree, but elderflowers make wonderful cordial (and it’s easy to make) and berries can be used for wine-making, among other things. Full height is around 6m, so again it’s feasible for a small garden. However, if this is going to be your only tree, opt for something more attractive…

…like a holly tree. As well as being glossy and green all year round, and great for Christmas decorations, they’re extremely wildlife-friendly. They grow best in the shade, where toads and hedgehogs often hibernate in the deep leaf litter beneath the plant.

Other good native species include yew or box, which can be kept clipped back to a manageable level and used as shrubs rather than full-blown trees.

For a full list of native British trees and shrubs suitable for smaller gardens, take a look at this rather inspiring RHS guide.

Another good thing to read if you have a small garden is this article in Garden Design Journal on the best smaller trees. Not all its ideas are native species, but it will certainly convince you that every garden needs its own tree. 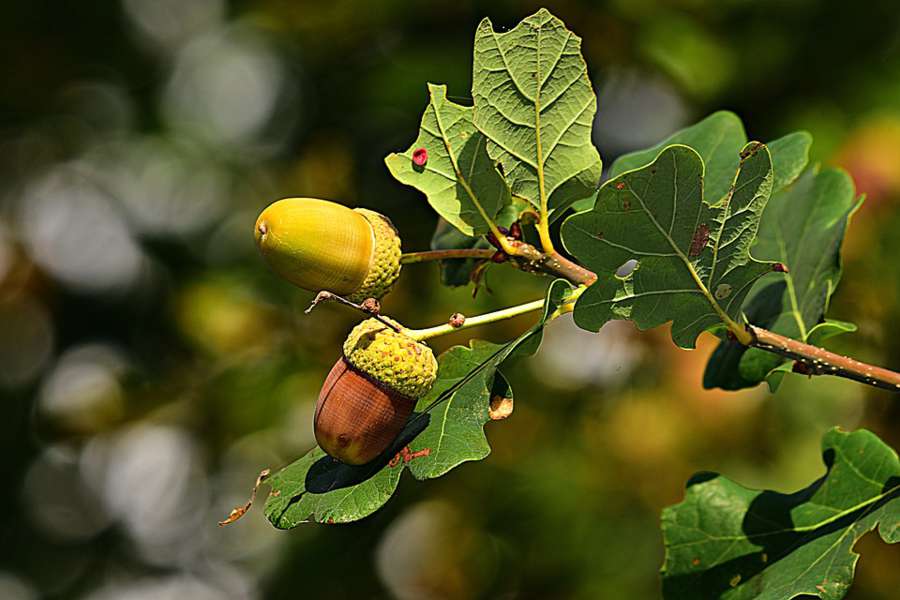 For those with more space, we’d still recommend all the native softwood trees we mentioned above. They can hold their own in any garden, and you can also use them for hedging or windbreaks. Planted in combination, they’ll support a whole array of wildlife.

But with more space, you have other choices too, including large hardwood trees. If it’s a ‘proper’ tree you’re after, you could look at an English oak, which could eventually reach around 30-35 metres.

If you live in the North of England or Scotland, your soil may be well suited to a the wych elm. These can reach 40 metres in height and hold the claim of being the only elm truly native to Britain. Caterpillars and birds especially are attracted to them.

For something prettier and slightly smaller (though still reaching up to 20 metres), consider a wild cherry tree, with beautiful purple bark and crimson cherries. The nectar and pollen-rich blossom is perfect for insects, but if you want the blossom to last more than a few hours or days, plant the tree somewhere sheltered from the worst of the winds.

The rowan (or mountain ash) is a good native British tree for medium-sized gardens, as it’s relatively slender and should stall at about 15 metres. Its berries turn a lovely orange-pinky colour in the summer, and are great recipe ingredients (they’re also very popular with thrushes and redwings). Traditionally, rowan trees were thought to ward off witches, so that could be another attraction.

Alder (which is known for loving poor and/or boggy sites) is a fast growing native British tree, but it also fixes nitrogen into the soil around its roots. This process is highly beneficial to nearby trees and plants, most of which are dependent on nitrogen for growth. Likewise, downy birch and silver birch both draw up nutrients from deep within the soil, again to the benefit of neighboring vegetation. Alder and birch trees effectively nourish and support the plants around them.

Again, the RHS guidance on native species are your friend and guide here, with a detailed list of trees and shrubs for larger gardens.

Another excellent source of information and inspiration is the Woodland Trust. Its website has user-friendly guides on how and where to plant native British trees and shrubs, and taking care of them once they’ve grown.

Why you shouldn’t plant some native British trees 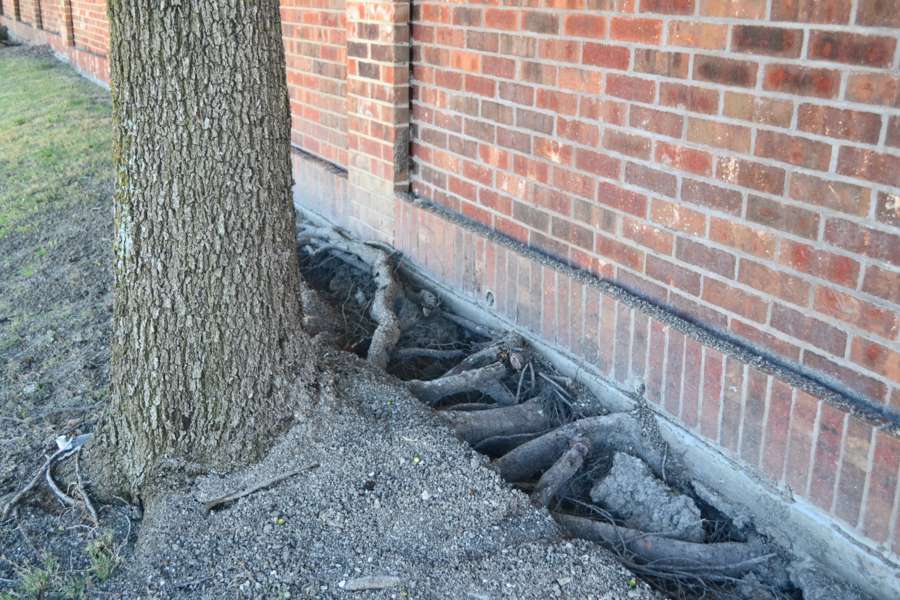 There are plenty of benefits from planting native species in your garden, but do be aware of some of the pitfalls too.

It’s definitely worth remembering that, with the larger hardwood trees especially, they’re not a quick fix. Hardwood trees such as oak, beech and elm can take decades to reach maturity, and may need plenty of TLC and protection in the early years.

With larger trees, you’ll want to be very wary of roots, how far they grow, and the distance from your (and your neighbours) property. You should plant them well away from walls and buildings, and also check if any pipes or cables run underneath your garden. Although beneficial to the soil and wildlife, willow and alder are bad culprits for damaging old foundations and pipes, so you probably shouldn’t plant these trees in smaller gardens.

Finally, whilst berries of native British trees such as yew and holly are wonderful for various forms of wildlife to eat, they’re not so good for human consumption. Ideally you shouldn’t plant them if you have children who are still at the stage of eating anything that looks like it may be a sweet.

If we’ve not convinced you to plant one or more native British trees in your garden, the Woodland Trust website has an online shop where you can buy single trees or handy mixes/packs. There’s everything from a special pollinator tree pack to the ‘Scottish mix’. 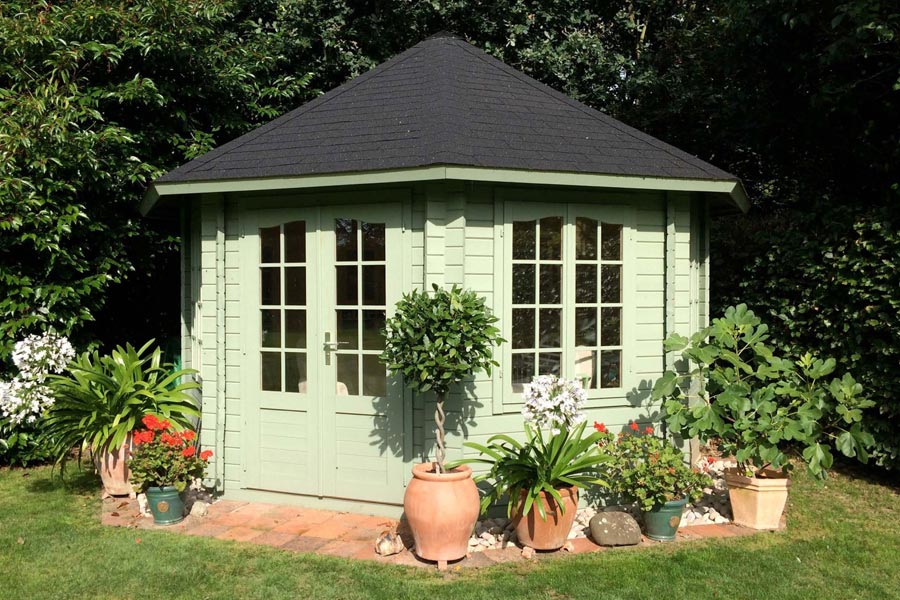 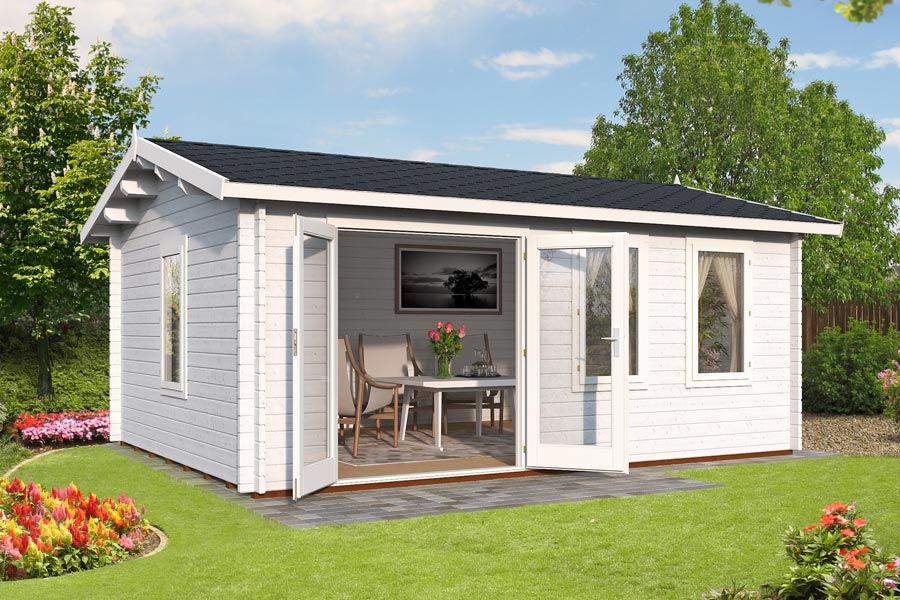 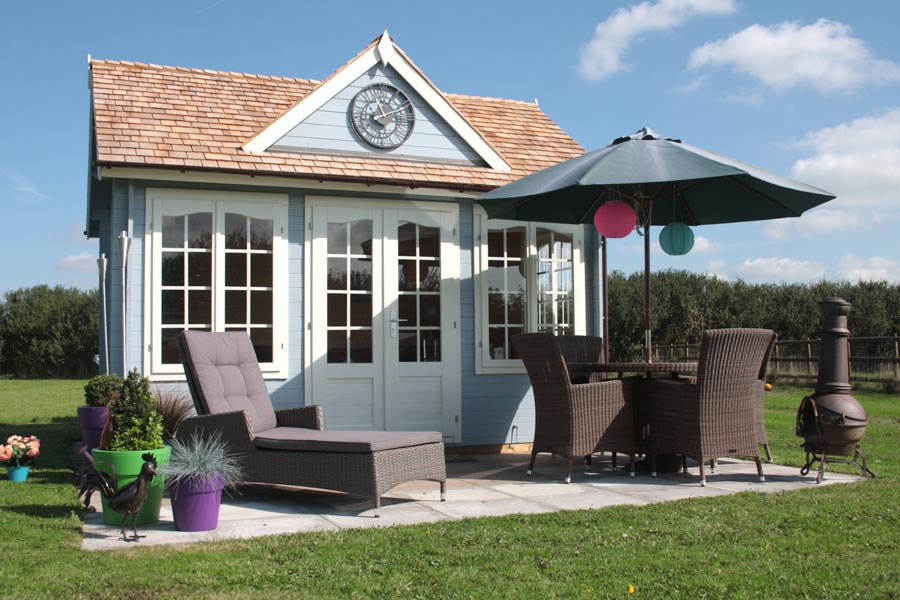 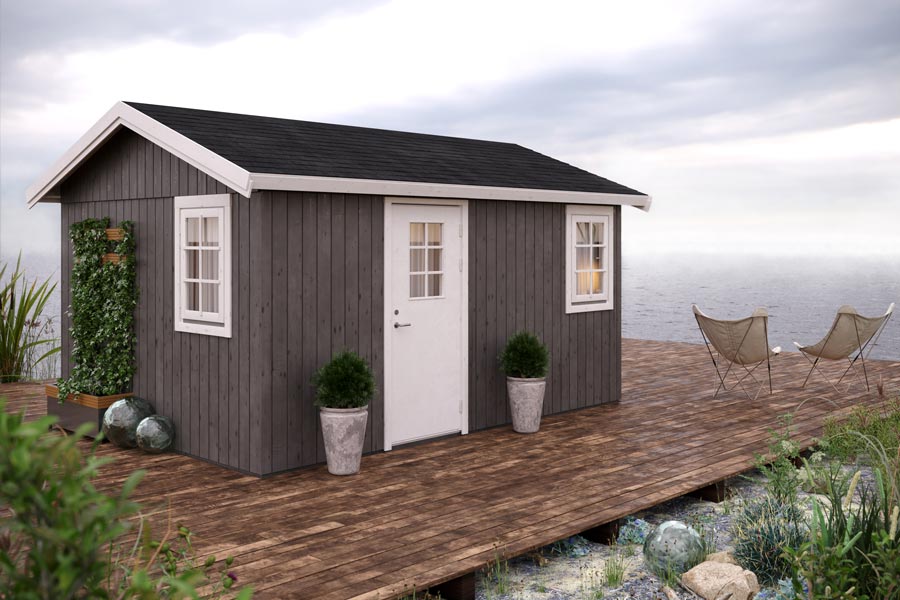 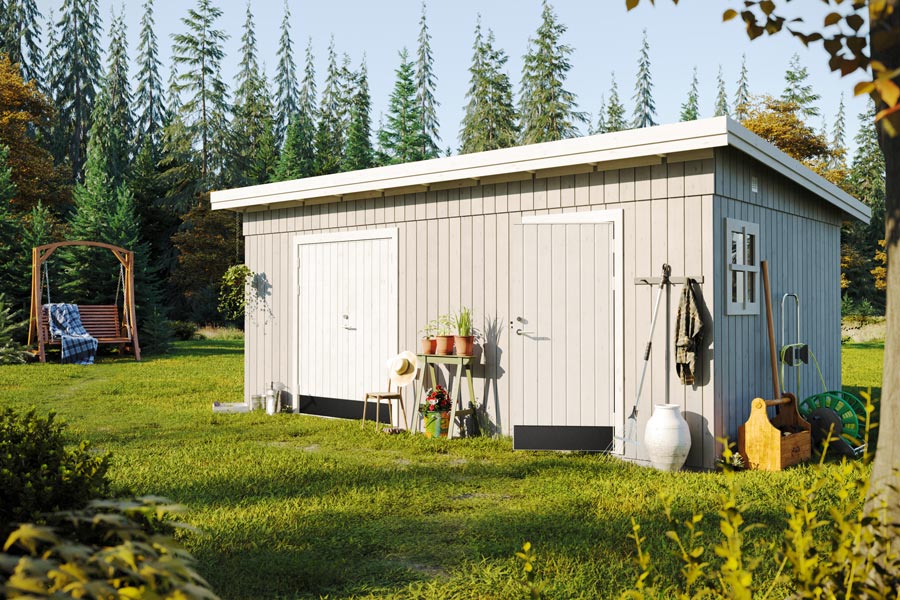 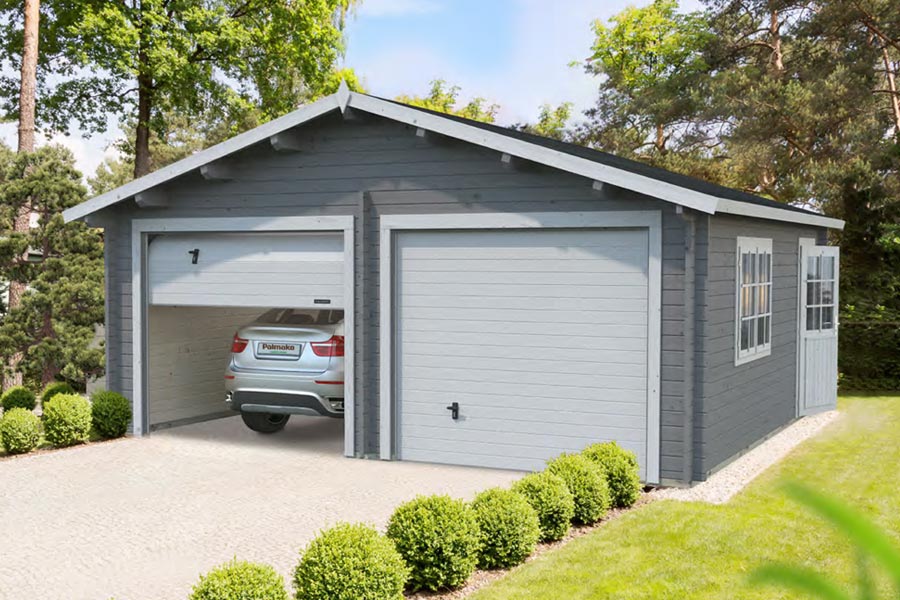 “Wow! You have been courteous, informative, efficient and thoroughly professional.”
Peter & Jacquie Smyrk

“Thanks again for taking the time to help me choose the right cabin – very helpful service.”
Grant